Hideo Ishikawa (石川 英郎) is a veteran voice actor who’s been in the industry for over 25 years and has done an impressive variety of voice work for numerous anime, sentai (Power Rangers) shows, and video games. He’s been known for voicing Kicchō Fukuda in Slam Dunk, Auron in Final Fantasy X, Squall Leonhart in Dissidia: Final Fantasy and Kingdom Hearts, Jūshirō Ukitake in Bleach, and, perhaps most notably, Itachi Uchiha in Naruto.

CFG had an opportunity to sit down and chat with Mr. Ishikawa about his career beginnings, hobbies, and final thoughts about his time as Itachi.

How are you enjoying Fanime so far?

It’s really different from Japan where the whole city is hosting the convention. It’s a really good atmosphere.

How did you get into voice acting and was something that inspired you?

I was originally studying opera and, because of that, I studied at a junior college for acting. From there I discovered voice acting and found it interesting and fun, so I decided to pursue that.

Do you still sing?

I don’t sing opera but during those times I pretend to sing opera. [laughs] Once you stop doing it’s hard to get that musical feeling back. I think I’ll have a chance to do a little more music, so I hope to do so when I get back to Japan.

What is something you’re most proud of when it comes to being a voice actor?

The biggest thing I’ve noticed since getting into this profession is that everyone is really good and wonderful. At first when I started I wasn’t really sure, but now know I believe everyone is wonderful. I think that’s the thing I learned most since entering the profession. I can’t do anything by myself! [laughs]

Is there a certain type of character you enjoy doing voices for the most?

So how do you prepare for your roles? Do you read the manga or just the scripts?

I don’t read the manga or original works. There are a lot of fans of the original works, so if I think about what the fans are expecting it’s pretty hard for me. I’m not doing it for the fans, necessarily. I think it’s m job to make that character the best it can be. So what I’ve been doing up to now is taking the script I get and creating a world within myself. After working on a lot of different anime, there are a ton of series I’ve come to like.

Is a difference between doing voice work for anime and video games?

In Japan for anime when we record usually all the actors are there, watching a video and recording together. For games, there are issues with schedules and lots of content to record, so we usually just record by ourselves.

For us we just read each line, but the people who put it together must have a real hard time! I worked on a game called Final Fantasy X and, for that, we actually all recorded that together. To accomplish that, we recorded once a week for a full day…and it took a year. So that’s how much of the script we had to go through. [gestures an arm’s length] Out of all the games you’ve done voice work for, is there one you enjoy playing?

After that I was in a lot of other games, too, but they were games where you change your perspective and point of view, so that made me motion sick. So I couldn’t play for more than fifteen minutes. I’m not very good with those! [sighs] They’re pretty hard.

Is there a specific character you’d love to voice if you had the opportunity to do so?

In Japan recently a lot of different things have been getting voiced, like swords, snacks, fruit…they’ve been putting voices in pretty much anything! So I couldn’t imagine anything you couldn’t put a voice in. But I like history. I’ve done some work for Japanese history like for Sengoku Warriors.

If I had the chance, I’d love to do an American hero. I’ve actually done the dubbing for Michael Jordan’s voice before. [laughs] He’s the best, he’s my hero. [laughs]

So are you a big fan of Space Jam? Are there any voice actors that you admire?

So what are some of your favorite anime and manga?

As mentioned before, I entered this profession through a music school so I didn’t really watch anime before. Even since I was young I enjoyed the sentai, Power Rangers type shows. So there’s a Power Rangers movie out, I’ll definitely watch it! [laughs]

For the series I work on, I’ll start liking and reading them. Stuff like Naruto, One Piece, Bleach, I like a lot of different things.

If you weren’t in the voice acting industry, what would your dream job be?

I probably would have continued studying music if I hadn’t gone into voice acting. It’s just as hard to become a famous singer as it is to be a well known voice actor. So I might have wound up as a music teacher. But there was something that I wanted to do. I’m often asked “If you could redo your life, what would you do?” I’d like to be a lawyer or something smart people would do, I guess! [laughs]

So who are your favorite Naruto characters?

I should probably say Itachi, right? [laughs] Honestly, it’s NOT Sasuke. [laughs] He just kept getting in his brother’s way, right? There were so many times I just wanted to say “Understand what I’m feeling! Why do you keep going against what I’m doing??”  So I like Itachi, but not Sasuke!

What are your feelings on how Itachi turned out in the end?

So first he fought Sasuke, died, but then came back to life. Then he died again. But the two deaths were very different. The first time he was still hiding something when he died. But the second time he gave up everything. So I feel like he was able to die without regrets after that. I definitely like the second time more. I was really happy to be able to say “I love you.” Any advice for someone trying to break into the voice acting industry?

I keep getting asked this, but it’s a hard question! I think it’s completely different being a voice actor in America compared to Japan. What I think both have in common is that you should watch a lot of really good works, get a feel for them, and be moved by them. So you should cry, laugh, and get angry with them because that’ll definitely become your own experience. I think taking that experience and putting it into your characters is what it means to an actor. I feel like the fastest way to become any actor is to watch yourself, listen, and feel the experience. It could be anime, or sports. So watch, experience a lot of different things, and use that to help you. 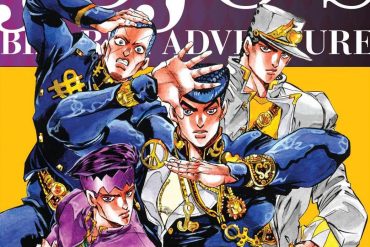